Richard E. Darshwood is an entertainer and GM who ran several games of Heckna at GenCon22 - out of eight games only two got TPKed! Here is his experience!

It’s 9:50 am on a Thursday. The line at the Starbucks wraps around the corner – stretching for what seems like miles down the hallway of the JW Marriott Hotel – and is filled with an incredibly diverse range of humans. Many of them have already spent the wee hours of the day donning the costumes of their favorite characters while others dress in jeans and t-shirts with cheeky quotes printed on them like “I’m not procrastinating. I’m on a side quest.” Still, some are wearing their pajamas… Maybe this is the attire they intend to adorn themselves with for the remainder of the day? Perhaps the entire weekend?

At any rate, among them, a single Converse-covered foot is tapping impatiently on the hotel carpet. It’s mine. And I can’t believe I offered to pick up Mocha Java Chips for some of my fellow DMs before the 10am game sessions start. I’ve done the math. Average wait time is one minute thirty seconds. Depending on how prepared each customer is, it could take 15 seconds to place an order or it could take another minute and a half. Ugh!!! There’s 11 people still ahead of me. I’m definitely going to be late to the first game I’m about to run at GenCon 2022. Damn it.

My impatience stems not from worry that my players are going to be upset. It is simply sourced by the fact that I am just so incredibly eager to share with them the zany and mysterious world that I have brought for them to play in. Fact of the matter is… I know they are all going to easily forget about the few minutes they sat at my table wondering where the hell I’ve been because as soon as I pop in, I get to punch the engage button on one of the most hilarious and thrilling adventures I have been inspired to create ever since I started playing the game Dungeons & Dragons; The Revelia.

“Hello! I’m your Dungeon Master; Richard Darshwood. Among many other things, I am a seasoned performer; a professional magician, voice actor, comedian and host of one of the silliest actual play podcasts on the whole ding dang internet called ‘Dungeons & Doobies’ where a bunch of my friends and I get together and attempt to play D&D while they get totally blazed in my dining room.

“I’m here to introduce you to a campaign setting that hasn’t even been published yet by Hit Point Press. It’s called Heckna and I am privileged to be one of the original backers of their Kickstarter when it first launched. Since then, I have received a ton of digital content that the fine folks at HPP have continued to tease us with as it is released and now have enough of a grasp of the world that I have been able to create this one shot you’re about to play so that you and your band of adventurers will get to explore this dark carnival themed environment filled with the most colorful and maniacal characters. Who knows, maybe just maybe you’ll get to meet Heckna, himself!”

“I wish to forewarn you, though, The Revelia is filled with all kinds of creepy crawlies and various malcontents with devious intentions. It’s nearly impossible to figure out who you can trust let alone what their saying because their language is all Gobbledy Gook. Oh by the way, does anyone here know what the word ‘coulrophobia’ means?

“If you did, then I would be concerned. But since you don’t then there’s probably nothing to worry about.”

This is how I would introduce myself and the game we were about to play at every table I ran during GenCon 2022. I would then follow up by reporting to my players the number of TPKs I had racked up since I began running Heckna at GenCon 2022. (It was five out of eight by the end of the weekend.) It’s important to note that the PCs had just as much fun dying as I had killing them and that it became quite evident that their bad choices led to their own demise each and every single time. But the laughter equally matched the squeals as the games progressed to their end.

You see, The Revelia is not a place for the feint of heart and its certainly not a place for heroes either. It’s a place where things like mindless merriment, non-discerning debauchery and good old fashioned funnel cakes are praised more than anything else. Don’t come to The Revelia looking for anything more or less than a thrilling good time and – most importantly – don’t forget to smile while you’re there!

Having the opportunity to combat my players with fang-mouthed donkeys, jesters and clowns and introduce them to some of the most intriguing NPCS – like the bird man who runs The Lost and Found, a one-eyed marionette who hands out streams of red tickets to anyone who roles a high charisma check and the ill-fated pink-haired balloon twisting harlequin with a twinkle in her eye and a longing to retrieve here Big Stick – made this four day weekend one of the most exhilarating experiences of my gaming career.

And seeing my players work together to figure out how to beat the many carnival games or outwit the thralls of Heckna provided some of the most pride-inducing moments of the con as well!

TTRPGs offer such a wonderful chance to share in a collaborative storytelling experience and the world of Heckna sustains a sensational stimulation of the imagination that you can’t help but create a unique and utterly hilarious good time even in just four hours spent with people you’ve never met before.

This was my experience at GenCon 2022 anyways. Sitting down or, in my case, wildly prancing around the table shouting in the many different voices that fill The Revelia, with complete strangers quickly led to some of the most fun games I’ve ever played.

“Four Mocha Java Chips and please hurry. I’ve got a game I gotta get too. Thanks!” 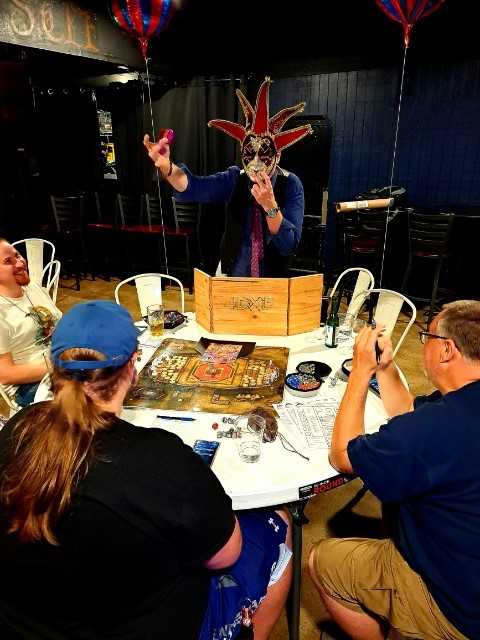